PrevPreviousThe highest mountain in the world? The Donnersberg!
NextWine hiking in Rheinhessen – Bechtolsheim at Pentecost 2017Next

Premiere for “Favourite wines beautifully set to music” at Rheinhessen 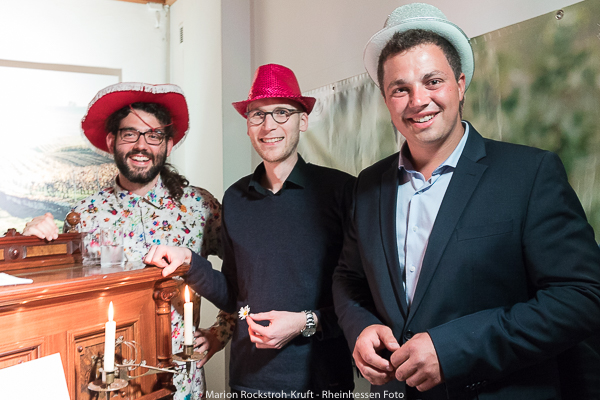 Unexpected sometimes is the best – friends asked us at short notice if we would like to accompany them to this wine and music event at the Spies Winery in Dittelsheim-Hessloch, Rheinhessen. The calendar was ok – and so we could attend the premiere – in many respects.

For David Spies, the junior boss of the winery, as well as for the musicians, such an event was a premiere. The singer and the pianist, Florian Seibert & Johannes Kohlmann, did not even have a name for their ensemble yet, that’s how fresh everything was 🙂

Comfortably prepared, we didn’t feel cold in the hall, despite the not very summerly temperatures.

David greeted everyone friendly and the whole thing had the touch of a private party – very pleasant.
The program made curious:
different wines would be tasted to accompany performances from operetta and musical, mostly performed in German.

The homemade sorbet from the “Frischling” made me hungry for more 😉 It was accompanied musically adequate by “Welcome” from the musical Cabaret.

The first theme was a wine, which is often drunk by women (quote David) and two pieces, which are sung by women, which are also about “women’s themes”.
2016 Merlot Rosé fine and tangy
“Can’t stop loving that man” (Musical Showboat)
“Nobody Bites the Shooter” (Musical Annie Get your Gun)

Afterwards followed by some representatives from the field “süffig” (palatably), which referred both to the wine, and the music.
2015 Riesling “Alte Reben” (old vines) dry
“Drinking Song” (Operetta Die Fledermaus)

Look and hear for yourself:

Of course, with this combination of wine and art, the sweet life must not be neglected …
2015 Siegerrebe Spätlese
“Hei, heute Morgen ich mache Hochzeit” (Musical My Fair Lady)

At the end it became “bloodthirsty” – which was reflected in the colour of the wine as well as in the last two themes of the songs 😉
2015 David’s Goliat, dry (red wine cuvée from Merlot, St. Laurent and Portugieser from the barrique)
“Ballad of Meckie Messer” (Threepenny Opera)
“In the jar to the green wreath” (Folk Song)

The tasty snacks for dinner did the rest to make the time fly by and after an encore everybody could comfortably finish the evening.

The two musicians will hopefully continue to pursue their joint project – their commitment, skill and the theatrical presentation made you want more!
The wines of the winery Uwe Spies are simply delicious, although I’m rather on the dry side (the selected ones rather fell into the category off-dry 😉
It was great – gladly again!