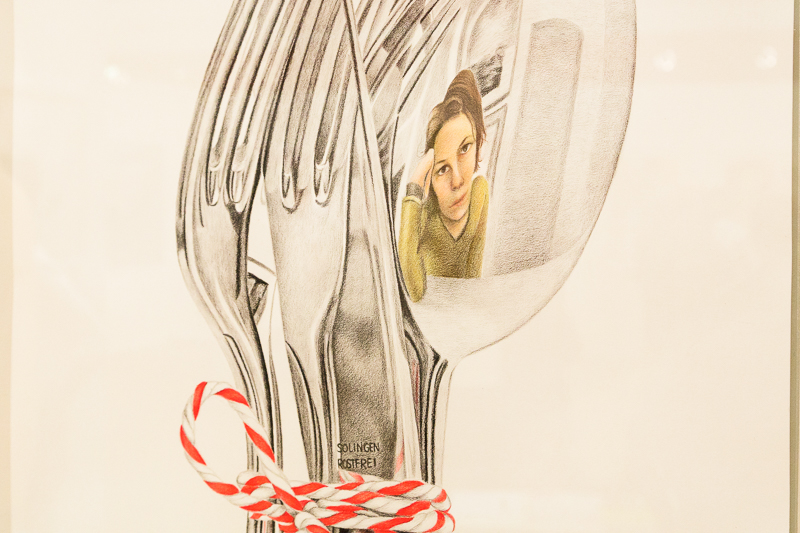 All good things go by three…

So today follows the third and last part of the series – artists from Rhinehessen who exhibited at Kunst Direkt 2014 in Mainz.

Last – not least … or even the best comes at the end with the “Young Positions”?!

Quote: “In his landscape painting Karol Rousin approaches the environment with a dissecting gaze and tries to make the different aspects of a landscape appear parallel. Depiction and reproduction of the atmosphere appear on an equal footing and allow the viewer a view beyond the actual landscape view …
It is the viewer’s point of view that decides whether from a distance the picture blends into a clear landscape image, or whether from close up the picture dissolves into abstract areas of colour.”

The first thing that caught my eye was the “proud chicken” with the red pumps!
The metal objects of Eckhard Schembs captivate with their natural immediacy and lively wit.
Each object delights in a special way, be it through the perfect craftsmanship of the trained locksmith or through an ironically funny hint!
An appreciative smile on the lips of the observer is guaranteed!

The hyper-realistic representation of everyday objects immediately attracted my attention.
In concentrated and masterly fine painting she creates images of “normal things” that captivate the eye and the viewer.
I found it particularly interesting how she creates a direct reference to the users of the objects via the integrated reflections.
In this way she rips them away from anonymity and arbitrariness, gives them something human, intimate and unique.

Quote: “Images about people – from the image as a position of realism.”
Susanna Storch primarily paints portraits of people, that often only show the face, …
Executed in classical fine painting on spatulated backgrounds, the pictures are neither aimed at the aesthetic ideal of beauty of photorealism,
nor are they hyperrealistic and thus far removed from the harsh existentialism of a naturalistic photograph.
“How can the painter make visible something invisible, like the inside of a human being?”

Quote: “In playing with colours I search for forms, use the possibilities of different materials, strengthen, reject, connect.
The aim is to develop a complexity that enables new discoveries to be made again and again.
Chance also plays a role here, chance not in the sense of arbitrariness, but in the sense of using the favourable moment.”

Quote: “We encounter the ceramic objects of the artist Dorothee Wenz like petrified beings, figures from a self-invented, fantastic world. Silent vessel figures in splendid garments stand next to gesturally formed body shapes.
We find the quotes of human and animal beings, plants and fruits, composed with extreme precision and in a cheerful lightness, in an unconventional structure and growing together to form inseparable hermaphroditic figures or as if they were captured in metamorphic intermediate stages.”

His involvement with classical art is immediately apparent.
The exhibited portraits are partly true to detail, but always and skilfully crafted.
Through an individual interpretation he allows the personality of the portrayed person to come to the fore and skilfully underlines it through different painting techniques.
While looking at them, one gets to know the person already without actually getting to know him or her.

In the exhibition area of the “Young Positions” there were also other abstract, bold and expressive works and installations.

It is nice to see that there are young people for whom art is so vital and important that they put it at the centre of their lives from an early age.

Surely we will be able to see one or the other again as an exhibitor at a later art-direct fair!

I am already looking forward to it 🙂