Liebfrauenmilch – better than its reputation? 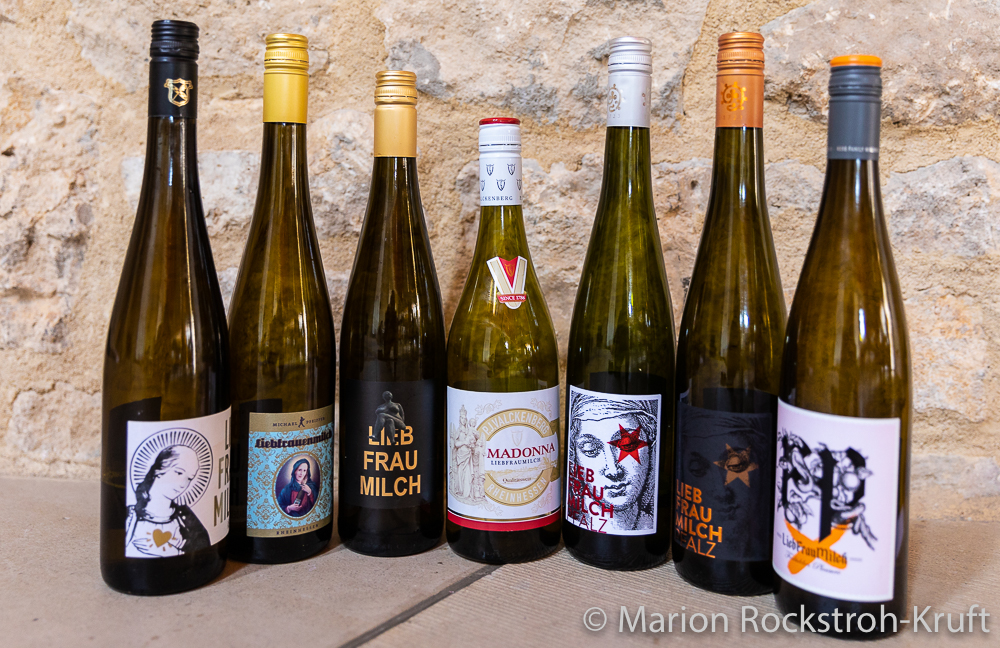 After I had stumbled across the subject of Liebfrau(en)milch in the media again and again last year, I thought that this could be a good topic for a session at the third Vinocamp Rheinhessen.
When I learned that Heiner Maleton, who had already enriched the first Vinocamp Rheinhessen as a winemaker, was now working at Weingut Wormer Kirchenstück, it was clear where I could start.
He arranged an appointment for me at the Valckenberg wine shop and Mr Queins from the management took an incredible amount of time for me to shed some light on the subject of Liebfrauenmilch. We also went to the church property so that I could see where it all began and Heiner even showed me the wine cellars.
At this point I would like to really thank him for this!

First, I was given a historical review that went back to the 14th and 15th centuries. At that time there were already first reports of pilgrims praising the Liebfrauenmilch. How did that come about?
The Capuchin monastery Liebfrauenstift was located on the Way of St. James and offered accommodation to pilgrims on their journey. Water was not the drink of choice in those days, in terms of cleanliness, and so the sisters gave the pilgrims to drink the home-grown wine. This wine was grown in the surrounding vineyards and was highly praised by all. It is said to be as good “as the milk of the dear women” and during the prayer to Our Lady of the Protective Mantle there was certainly an extra prayer of thanks for the delicious drop.
Newspapers were not yet known at that time, so that the pilgrims also had the function of transmitting news. One of the particularly interesting and good news they carried to the world was obviously the praise of the wine they had been given to drink at the Liebfrauenstift. Thus the foundation was laid for the fact that centuries later the Liebfrauenmilch was regularly drunk and highly appreciated even amongst Britain’s royal family.

So much for the positive part of the story, because as always – where there is much light – there is much shadow. Unfortunately, the name Liebfrau(en)milch was not protected and some black sheep managed to seriously damage its reputation. When the first wine law came into force in 1908, the term and the quality were already so “watered down” that even the clear but far too broad definition could no longer put a halt to that. If you google Liebfrauenmilch today, a quote (which I am reproducing here in translation) sums up the picture you get very aptly: “Liebfrauenmilch is the ultimate embodiment of bad German wine”.

Whether it was Minister Wissing or a few winegrowers who were keen to experiment and founded the Liebfraumilch Wine Society in 2017 and thus brought the subject of Liebfrauenmilch back into the limelight, is difficult for me to say. The fact is, however, that it is a pertinent topic again, which we have illuminated from different angles in a session at Vinocamp Rheinhessen.

(1) Quality white wine from the specified regions Nahe, Pfalz, Rheingau and Rheinhessen may be described as ‘Liebfrauenmilch’ or ‘Liebfraumilch’ only if

2. the residual sugar content is within the range permitted for the indication of taste ‘sweet’ in Part B of Annex XIV to Regulation (EC) No 607/2009.

3. In the case of the wine referred to in section 1, the indication of a vine variety and the name of a geographical unit smaller than the specified region shall not be permitted.

So much for the theory …
Is there really any Liebfrau(en)milch that could be used to echo the image of the 19th century and bring the appropriate quality to the glass?
This is the question we have been investigating during our tasting.

Mr. Ruzycki explained to me at the handover of the sample bottle that he had become aware of the subject of Liebfrauenmilch through the newspapers, i.e. through an interview with Minister Wirsing. From his point of view, the term was absolutely conservative and not at all present among young people.
Since he needed a successor for his sweeter wine in the assortment, he saw it as a fun idea to do something different. It was clear to him that it should be “super fruity” and that the label should be completely redesigned, with an analytical font.
Since 2016, he has been carrying Liebfrauenmilch in his range and has received good to very good feedback.

Mr. Pfeiffer also became aware of Liebfrauenmilch through the discussions in the media. The name meant something to him, but he only knew it from his vocational school days. As this winery in Gau-Algesheim was also looking to expand its range of sweet wines, he thought “that something could be made of it after all”. Liebfrauenmilch has been on his product list since 2017 and after a careful first bottling, the second filling is already almost sold out. For him it is certain that he will continue with Liebfrauenmilch!
Two funny details:
– his own Liebfrauenmilch was the first one he drank
– on the very high-quality label, the Madonna has his wife’s face … if this is not an homage, then I don’t know what is 🙂

Mr. Lösch did not want to leave the idea of Liebfrauenmilch to “outsiders”, especially as his Liebfrauenmilch comes from the Wormser Liebfrauenmorgen location.
In the anniversary year Rheinhessen 2016 he had launched a sweet wine, which he called 18/16 and which was well received. In search of a “successor name”, the current discussion came at just the right time and with the location on Skulpturenweg, the idea for the label had already taken form – the Wormser Wonnefrau contributes to the fact that the wine will certainly be recognized.
In his experience, it is difficult to sell the wine purely via the wine list, but those who have tasted it are regularly pleasantly surprised! His new creation is also well received by customers, albeit in a small edition (600l).

The classic!
If you think of Liebfrauenmilch, you cannot help but think of the name Valckenberg!

The Valckenberg family has been active in the wine trade since 1786 and, following secularisation at the beginning of the 19th century, acquired the Capuchin monastery and a large part of the vineyards belonging to it. From that moment on, they were now also wine producers.
From the very beginning, they attached great importance to quality and, early in the 20th century, they were one of the first companies to have the name “Madonna” protected as a trademark for their Liebfrauenmilch. The Liebfrauenmilch from Valckenberg was always intended as a clean, good and tasty wine in the entry-price segment and intended for export.
Keeping the idea of quality in mind, they also distanced themselves from the price wars taken place in other parts of the world, especially in Great Britain, and continued to focus on quality. Since Japan was not so price sensitive, the country remained a stable market for the Madonna brand over the decades.
Mr Queins said that in Japan, it is seems to be good manners to toast with a Madonna on special occasions. 🙂

Since 2008, no grapes from the original location of the Liebfrauenstift church property in Worms have been used in the Madonna.

… and a little info on the side …
The Winery Liebfrauenstift is independent again since 2016 and the 2018 vintage will be the first with Heiner as manager of the winery – we keep our fingers crossed!
Oh, and I think it will be everything but Liebfrauenmilch 😉
Riesling fans among you can already look forward to the launch!

Who of you has ever been to the Worms Convent?
I was really impressed by the size of the vineyards, which are located here in the middle of the city!

Mr. Hammel is often quoted with statements like: “Tradition does not mean preserving the ashes, but fanning the flame!”
And when asked why he brings the Liebfrauenmilch “back on stage”, he likes to say: “Because this thing is simply sexy and sexy things never go out of fashion.”
He describes his Liebfrauenmilch as juicy, aromatic, lively and airy, which can be enjoyed well chilled just like that or as an aperitif and also perfectly combined with food.
His Liebfrauenmilch is even available in two different quality levels:
Liebfrauenmilch and Liebfrauenmilch Premium
They differ in the cuvée, i.e. the composition and the ageing. The Premium variant is matured in wood.

The cellar master and winemaker Dirk Würtz would like to set aside the dusty prejudices about German Liebfrauenmilch with his wine “Forbidden Pleasure”.
The label refers to the foundation of all temptations:
Branches of an apple tree and a snake wind around the two letters F and P – another reference to the “forbidden pleasure hidden in the bottle”.

Conclusion on the subject of Liebfrauenkirche(en)milch:

Who knows, let’s see what is still going on on the Liebfrauenmilch front – I’ll keep you posted 🙂