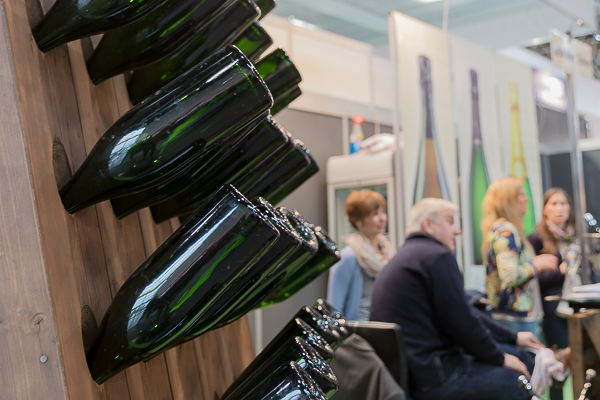 I have been asked by many – is this really your first time at ProWein?

Yes – but there is always a first time – isn’t it?

So in the morning I left at 6:00 by train and just a little more than three hours later I went through the accreditation – luckily successfully.
ProWein is a pure trade fair, which means that only people who are professionally involved with wine and spirits, as well as the press, can gain access to it.

Well, I must honestly say that I have already been to some very large fairs – but ProWein is special once again because the topic is much more restricted than at other fairs of comparable size.

I took the advice of a professional to heart accordingly – he said: “Take an area or a topic and stick to it – otherwise the offer will overwhelm you”.
So what would be more obvious if I were to go to this world’s leading trade fair for wine and spirits with a regional blog?
So I stayed in halls 13 and 14 – with German and Rheinhessen wine 🙂

The first thing I did, of course, was stop by the Rheinhessenwein stand.
So I could stop by directly at some winemakers who sponsored me with the event Vinocamp Rheinhessen.

Why wander far off when good is so near…
Zornheim-meets-Zornheim at the stand of Julia Schittler, who celebrated her premiere – freshly bottled for ProWein, the cuvé was tasted straight away.

Right next door there were four young winemakers, with whom I also tasted one wine each – motto – which is your “wine you fall in love with”?

The poster was a real eye-catcher – I liked it!

A visit to a trade fair like this always serves me as a further education – so I attended two lectures offered by the business magazine Wein & Markt.

The topic of aromas is particularly interesting with wine – what aromas do I get in my nose when I smell a glass of wine?
With an absolutely funny trick I have learned in this way that you can’t taste cinnamon – you can only smell it.
Nose closed – candy in the mouth – nothing – nose open – CINNAMON!

I looked a little bit beyond the edge of my own plate at the gin tasting. It was already clear to me that not every gin tastes the same – but such differences – unbelievable!

From England, Scotland, Canada and USA, as well as from Denmark, Germany, Switzerland or South Tyrol. And in terms of botanicals, from more familiar flavours like juniper, lavender, cucumber or lemon, to more unusual ones like amaretti, spruce needle, basil, rosemary, bog birch or cardamom.
… and above all… always order a Gin AND Tonic 🙂

What I found very unfortunate was that many exhibitors already packed up from 5 pm on. OK – it was the last day and fairs are always very exhausting, but if someone like me can only come for one day, it is a pity if a whole hour is “robbed” in this way.

Conclusion – when was the date for next year again? 😉