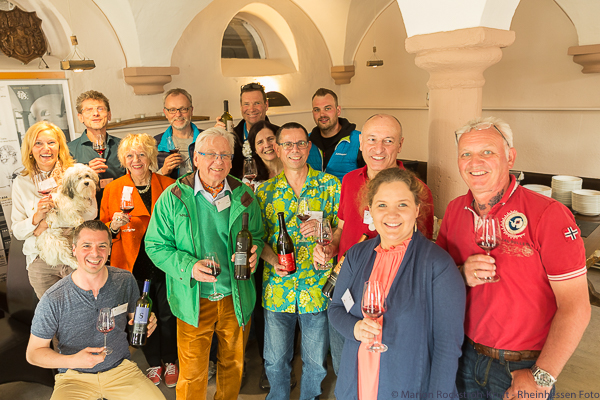 Have you ever heard of Vinocamp? A Barcamp on the subject of wine?

Whenever I ask this question, the eyes usually get big and the question marks appear in the eyes.

Let’s take it one step at a time.

What is a Barcamp?
An open event format, in which all participants actively participate and the programme items are largely determined on the day of the event, because it is the participants themselves who hold these so-called sessions (discussion groups).

And a Barcamp on the subject of wine?
That’s a little easier!
The format remains the same as for the Barcamp, but participants come together to exchange ideas on the topic of wine.

Ah – so it is a meeting of professionals who want to exchange ideas on a topic?
No – because that’s exactly the great thing about a Barcamp, that all interested persons – no matter what level of knowledge – can get involved and participate.

Okay … and that works?
Yes – it works and that’s exactly why it’s so great and diversified!

As one of the participants from the host winegrowers said so beautifully this year: “Marion, I could not imagine that this would work. But it does work and is absolutely great – I will be back next year!”

In this context, I have to look back briefly on the first Vinocamp Rheinhessen, which I had organised in Mainz in 2016. Everything was new, nobody knew what it was, and yet I managed to get not only old vinocampers to participate.
At the final session last year, I put up for discussion my idea that I would like to go to the rhine-hessian communities and organize the event together with the local winegrowers. Thereupon Monika Bank-Scherner immediately took the floor – “Then let’s go to Flörsheim-Dalsheim next year – I will support you there.

Of course you can’t refuse such an offer!
And so it came about that a great group of winegrowers from Nieder-Flörsheim was formed, without whom this Vinocamp would not have been possible. The cohesion and cooperation of the winegrowers impressed us all!

A precondition for such a regional Vinocamp to take place is that enough sponsors are willing to support the whole thing with time, commitment, product use or financial help.
Because – the format is non-profit, which means that the event does not pursue any economic profit goals.

Whoever has ever planned an event knows that the last weeks have not been boring – but it was worth it!

Meet-up on Friday for Vinocamp Rheinhessen 2017

On Friday evening we met in the winery Göhring for a little tasting – as an extra the father-in-law came along, who earns his money as a magician – what fun we had!

Afterwards, the wine and culture ambassador Beate Hess took us under her wings and during a short evening walk she familiarized us with some of the special characteristics on site.

At the end of the evening we stopped at the Schmitt winery. Daniel perfectly embodied the motto “On to new paths” and presented us with very tasty natural wines – something completely different for once!

Saturday morning started extremely early – Frank Hamm had a special challenge for me. For his project #12sunriserheinhessen we went into the field at 7:00 am to photograph the sunrise. It was worth it, even though I am usually more of a sunset photographer!

Saturday morning all participants met at the Christmann Winery and started the day with the introduction round and session planning.

At the Beyer-Bähr Winery not only sessions took place – among other things with the delicious Pinots from Switzerland from the Schwarz Winery, which were spontaneously compared with representatives from Rhine-Hesse – but also the well-earned lunch break – during which we could strengthen ourselves and regain our power for the afternoon.

The weather god meant well with us, so that we could carry out the Secco-tasting – with thirty (!) Seccos – in the garden of the Köth winery. How good that we also had enough mineral water from Staatlich Fachingen at our disposal to “rinse” between the different flavours again and again – and the Chilli of course at the end 🙂
Also the session on cheese & wine was a real picnic, where, as with so many other things, Rheinhessenwein e. V. supported us wonderfully!

At the Peth winery we went “in Medias Res” – with a tasting of natural wines.
Orange, PetNat and crossovers – that was sometimes a challenge, but super exciting and broadened the horizon massively. A separate post will follow at a later date – I will link it here.
Unfortunately, we didn’t get through here as quickly as we would have liked, but fortunately the session on social media could be moved to the courtyard and into the bright sun.

In the afternoon we were all ready for the highlight – the “speed-dating with the Rheinhessen winemakers”.

12 wineries presented a small selection of wines, whereby the bell rang after four minutes and the participants moved on from winegrower to winegrower, just like “playing tag”. In order to allow for a relaxed tasting and conversation, an appropriate time slot was planned for the end of the event. Wine tasting every minute – this way you get a great overview in a short time!
Besides the host winegrowers, the project WeinEvolution16, the winery of the city of Mainz, the winery Flick and the young winegrower Oliver Eckart from Schwabenheim with his O-line were also present.

Thanks to the commitment of Ulrike from Weingut Engel and all participants, we had a wonderful buffet for dinner, where we also had the delicious chutneys and dips from Meingemachtes Manufaktur which were eaten in lightning speed. Christiane had made them available to us quite spontaneously when I met her at the Rhineland-Palatinate exhibition.

With the meal and afterwards there was a large selection of wines to taste – some winegrowers provided us with extra wines for this as well, and they didn’t let us down 😉

True to the motto – the best comes last – there was then an 8-course dessert. Delicacies from the Chocolaterie Holzderber met harmoniously with Nieder-Flörsheimer selected wines and brandies.
It was delicious!

On Sunday morning, we met again for the next round. The night was a bit short – but with the help of the super tasty coffee from the coffee manufacturer Weidmann and a delicious piece of cake from Café Sommer we were soon all fit again for the new session planning – not to forget “Weck-Worscht-Woi” (Bun-Sausage-Wine) of course 🙂

No – no easter-egg hunt – that was the photography session 😉
Great tips from Achim – to be implemented very closely and directly!

Sommelier Yvonne Heistermann cleared up a few prejudices during the session on “Which glasses to use, in combination with carafes and decanters”, which was sponsored by Zwiesel, and encouraged us to try out which glass suits us best. Because in the end everything is always a question of taste!

… and what delicious wines did we get again from the wineries Erbeldinger, Peth-Wetz, Eppelmann and Gutzler from Rheinhessen.

During the session with Volker Raumland he betrayed secrets and everyone listened intently.
So – I have a new favourite sparkling wine – or two or three 😉

After everyone had helped, the Weingut Scherner-Kleinhanß quickly looked very mannerly again and we let the second Vinocamp Rheinhessen end with a recap session.

What did you like – what should be improved – another date …?

… the enthusiasm was great. Some people would like to see more touristic topics and find it difficult to get used to the idea of maybe changing to the first months of the year – others were critical of the fact that we had interpreted the Barcamp rules generously.
But everybody liked it – and that is the most important thing 😉

Hope to have aroused your curiosity and – until the next Vinocamp Rheinhessen in 2018 – see you!